This presentation looks at the goals and value proposition behind 5G technology.To set the scene, let’s look at where we’ve come from.  Most of you will have a 3G network, and many of you will have a 4G or LTE network.  Now we’re moving into 5G.  We are still implementing and investing in the LTE/4G network, so why are we already looking at 5G? 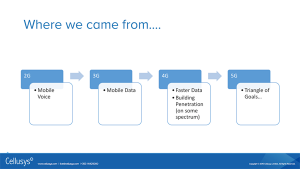 First little history. Years ago, we had 2G – it really was the first time we had a decent mobile voice. 3G introduced mobile data.  Now, 4G has introduced faster data, but it also had a secondary benefit of providing better building penetration radio signals.  This is where you had improvements in lowering the number of dropped calls and lowering the amount of jitter or even dropped calls.

Now, 5G is got a whole set it’s got three main goals and I call them a triangle of goals so let’s take a look at what they are. 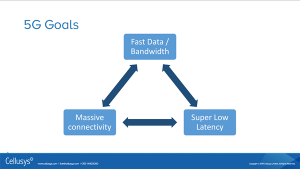 First, starting at the top.  This is fast bandwidth.  Think of a WiFi, or better, maybe even a wired-LAN experience, but over the mobile network.  If you think of your current usage, this might not be too exciting, but you and your smartphone are not necessarily the target market. You on your smartphone, with a WiFi connection, backhauled by ADSL have enough speed, but other applications need faster access, and need that access on the move and outside of the city.  Think of a drone sending back real-time high definition video.

5G has its sites set on more than just the smartphone market.  You are going to see a lot of indicators of that as we move forward.

Let’s move on:  On the lower right-hand corner, we look at super low latency.  Your ear cannot pick up small amounts of jitter in a voice call, so again this feature is not for voice on a smartphone. This is for applications that cannot lose access to their central server and need to be able to do so very quickly in near real time. Think of a drone being controlled remotely.

Looking at the lower left corner; we’ve got massive connectivity.  We’ve got billions of IOT devices, that now need to connect and the 5G network is going to be the one to do it. These device might not send much data, and might not send it very often, but they can have batteries and usage profiles that last 10 years, and they have a very low budget to spend on their connectivity costs.

Let’s get into more specifics.  We’ll take a look at each one of these three goals in more detail. 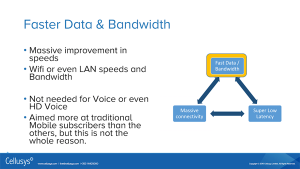 I live in a city. I’ve got a great ADSL service, and my Wi-Fi experience is really great, but as I leave my home, and leave the city, my service levels start decreasing.  But realistically the quality of a voice call remains very good, even when I am in the forest.

Now instead of me doing a voice call, imagine a much more data-intensive application. Let’s say a team paramedics in the field, are trying to share real-time, high definition video with of doctors and nurses to work on an emergency procedure. Additionally, instruments and sensors in the paramedics ambulance are sending a steady stream of data back to the hospital.  Now we start to see where greater bandwidth can be required.

Here we’re looking at applications like a connected car.  Now if it’s a connected car that somehow needs to talk to its server to makes its decisions then things get a little scarier.  You don’t want that car to ever lose connectivity to its central server.

We are not looking at huge amounts of data here, but it is time critical and super reliability is required. This is real-time or near real-time applications. 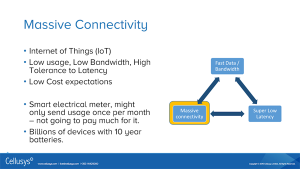 The third goal for 5G is Massive Connectivity.

This is where the Internet of Things comes into play.  This involved things such as your electrical meter or your water meter.  These devices do not send a lot of data, nor do they do it often.  But there are billions of potential IoT devices.  It’s not just your electrical meter your water meter.  It’s going to be your coffee maker, your refrigerator, your doorbell, your the video connected to your doorbell to see who’s at your front door.   And these are just domestic.   Manufacturing, Healthcare, Community Services, and Agriculture have billions of more potential devices.

All these massive numbers of devices are going to connect to the internet and the 5G network wants to be a part of that. It’s billions of devices they have fairly low usage along with that, comes a low-cost expectation.

These devices often a very high tolerance for latency. If there’s delay in getting your electric usage back to the electrical company, so they can bill you; a few seconds won’t make much of a difference.

You can see these three goals are actually looking at completely different areas of the network and they need different things. 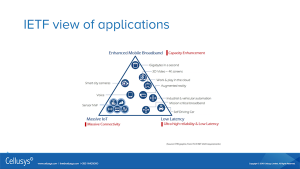 This triangle of goals, we have been discussing is not new.  The IETF draws it out in this diagram, with applications.  Let’s look at some of those applications and where they fit.

Voice is somewhere in the middle.  Your ear does not hear very high frequency, so we don’t really need to go to a super high bandwidth in order to get you high fidelity.  Your ear just isn’t going to hear it.  Similarly, you don’t actually notice the most delays and jitters when you’re having a phone call.  Your ear is just not that perspective of it.  So the voice is somewhere in the middle and it is not really the reason behind 5G at all.

Internet of Things or IoT.   This is a real reason for 5G.  This represents massive numbers of devices and sensors from water meters to refrigerators to doorbells.  There are billions of devices that will be coming on stream and we need some way to connect those back to whatever server they need to talk to.  These devices only need low-cost low bandwidths and have quite a lot of tolerance to latency and delays.

Virtual reality applications are kind of somewhere in the middle. They take a fair bit of data – more than a voice standard voice call, and of course, you’re getting audio and video.  You want your VR application to respond fairly quickly – if I turn my head in a VR game if there’s a delay of more than 20 milliseconds before that video changes, you are going to start noticing it.

Wi-Fi speeds everywhere. At home, you might have a fiber connection or DSL and have a great WiFi experience.  But as you leave the city, that service can get pretty spotty.   And what we are looking for here are WiFi or LAN speeds while on the move.  A few years ago we got rid of our landlines, because mobile was so good.  This could do the same thing for fiber or DSL connections.

And then we get down to the super low latency with lots of reliability.  We don’t want that car off the network, without its server, barrelling down the street.  Low latency – there’s a lot of input coming from that car – very quickly.  We want to be able to do use that information, both direction.  So this is where the 5G application the self-driving car or drone comes into play as a 5G goal. 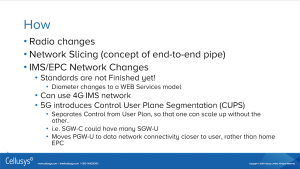 How are they going to accomplish this?

First of all, there are some radio changes.  There are three spectrum bands that are being used in 5G.  So the radio changes a bit for 5G.

There’s a concept called network slicing, which makes an end-to-end pipe. You can think of this in the old circuit switch days where we actually nail up copper connections.  Well obviously, this is a packet network.  We are not nailing up copper, but on that copper connection, there was no decision to be made for that data.  The data always knew where it was going.

So doing network slicing and making an end-to-end pipe, sets up where all that data will go along that end-to-end pipe.  This is setup ahead of time.  Now each individual router or system in between doesn’t need to open it up look at the headers and parse it out and figure out where to send it.   It’s all set up ahead so that if data comes in on one connection, it goes out on another specific connection and it speeds things up dramatically.

Those of you are familiar with frame relay systems will have seen the same idea on the X25 network, from 20-30 years ago.

There are some changes taking place in the core network so carriers can use the 4G network.  The HSS and elements such as P-Gateways and S-Gateways can be used in the 5G.  However in full 5G mode that what network design does is to separate out the user plane and the control plane even further.  So you can have an S-Gateway which only does control functionality and another which only user functionality.  The reason for doing that is that you can start to scale up and down the number of gateways according to your requirements.  Maybe for these applications, you require more control gateways than user gateways or vice versa.  You can have one control gateway managing a whole lot of S-gateways which are doing the user plane.  In a virtual or cloud environment when this IMS core, and EPC core, are running on a cloud environment – spinning up new S-Gateways or P-Gateways should be part of the cloud infrastructure.  Elasticity of services is an important feature of the cloud, and 5G wants to take advantage of that.  That’s why we’ve separated out the user plane from control plane even further.

Today, there is still a Diameter network. Certainly, if you’re using a 4G network you still are using diameter for a lot of control plane.  That hasn’t gone away, yet.  It still contains the same Diameter security issues that exist in the LTE network.

However, the various industry bodies are working hard to write new specifications to replace the Diameter in the 5G network with a more secure Web Services model. 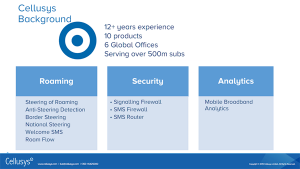 A few last comments about Cellusys, before I close off.

Cellusys is based in Ireland.  We have offices around the world.  We work in Roaming, Security, and Analytics.  Principally on the SS7, Diameter, SMPP and GTP networks.  For roaming products, these are things like Steering of Roaming and Roam Welcome.   The security front is a big issue these days.  Hacking of SS7, Diameter, and other networks allows for the taking over cell phones, eavesdropping and other fraudulent uses.  You certainly don’t want that connected car to be taken over in the IoT space!  So working in Security, Cellusys provides Signalling Firewall, SMS firewalls, and other products which are very important these days.  Analytics to be able to understand what you’re doing with roaming and security is the third pillar of what Cellusys takes care and looks after.

That is all from me for now.  Please watch this space for future videos.