Home » News » Vermut @ MWC. Because it’s in our nature to always bring you the next great thing

Vermut @ MWC. Because it’s in our nature to always bring you the next great thing

At MWC each year we invite our friends to experience some of the finest wines of the Catalan region.

But at Cellusys, we always, want to introduce you to the next great thing.

Vermut, though barely known to visitors, is one of Barcelona’s deepest culinary traditions!

Join us for a guided tasting of several distinct vermouths, with the appropriate food pairings, and taste a different side of Barcelona!

Our Somellier Sam Zucker, as is our tradition, will also introduce us to a few fine wines of the region as well as the usual jazz & friends.

Tuesday 28th February, 6pm as you leave for the day until late in the Cellusys facility at the Fira – Placa d’Europa 25 RSVP sinzy@cellusys.com

In the world of vermouth there are two main family trees from which countless variations stem: Dry Vermouth and Sweet Vermouth. While the former is the stuff of classic martini cocktails and French chef’s larders, the latter is a less agressive, bitter-sweet, aromatised and fortified wine that if enjoyed on ice as one of our city’s most beloved aperitivos — an appetite-stimulating drink that plays an integral role in any weekend gathering among friends in Barcelona.

Sweet Vermouth (often referred to as Italian-style vermouth) has many varieties that run the gamut of bitter-sweet herbaceousness, made from numerous grapes, both red and white. When sipped on a Sunday afternoon by the shores of Mediterranean, vermouth pairs perfectly with such local delights as hard cheeses, aromatic olives, salted anchovies, cured meats, potato crisps, confit artichokes, mussels, cockles, and more. The tradition of “doing a vermouth,” as they say, pre-dates the arrival of tapas in Barcelona by several decades, thus making a glass of vermut negre and a plate of olives one of the most authentic flavours a visitor to the city can experience! 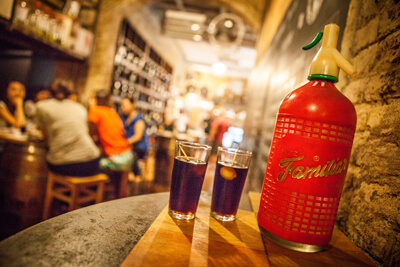 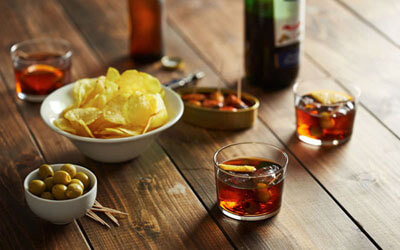 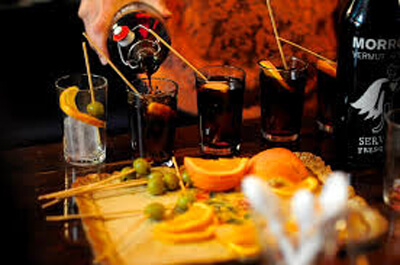